The River Gaur is the main tributary at the west end of Loch Rannoch, the extreme end of the River Tummel system. In order to reach this area, salmon have to pass Pitlochry Dam, Clunie Dam, Dunalastair Dam, Rannoch Weir and Gaur Dam as well as negotiating several large lochs. Few naturally spawned salmon were present in this area in the 1980s, reflecting very low numbers of salmon which were counted passing through Clunie Dam into Loch Tummel at that time. However, possibly as a result of improvements in fish passage at Clunie and Pitlochry dams in the 1980s, numbers of adult salmon ascending Clunie Dam increased three-fold in the 1990s.

A survey at Gaur in 2000 indicated that salmon were then reaching Gaur Dam. However, there were concerns that salmon might not be able to progress further. During a refurbishment of Gaur Power Station in the early 2000s SSE made a significant investment to upgrade the fish passage facilities (automating the borland fish lift). However, it was discovered that when the fish lift was in operation, flow to the lower fish pass was reduced. Therefore, in order to maintain a suitable flow, final improvements were made as part of the Conservation of the Atlantic Salmon in Scotland (CASS) EU LIFE project in 2006.

In order to assess the success of these improvements TDSFB undertook to perform annual monitoring of this area from 2006 onwards. These surveys continue.

These ongoing surveys have demonstrated that salmon do now regularly reach Gaur Dam and that in most years, but not all, salmon do pass through and spawn in tributaries upstream. The population is still at a very low level, probably as a result of the small numbers of adult fish which still reach this area, but the results are nevertheless encouraging.

Most years juvenile salmon are now being found upstream of Gaur Dam. The adult fish have to ascend five fish passes on the way and pass through two very large lochs.Read more ...

Effects of the Gaur fish pass 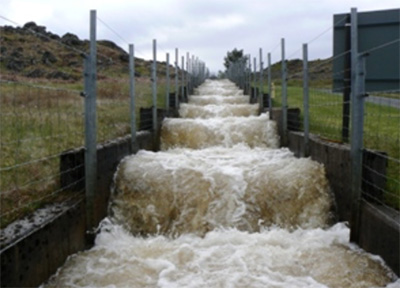 Gaur fish pass is the longest pool-step fish pass in Britain and ends with a borland fish lift at Gaur Dam. Scottish & Southern Energy have recently made a considerable investment to ensure that fish pass flows and the operation of the borland lift are optimum for salmon passage.