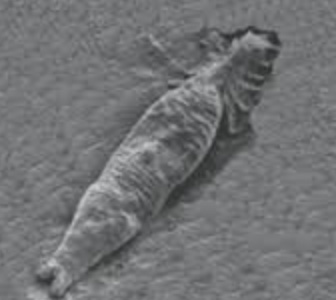 Gyrodactylus salaris is a parasite which intects the skin gills and fins of salmon trout and some other freshwater fish. It is so small that is can hardly be seen, Neverthe less it can do serous harm to and even kill salmon. The parasite can survive for servearl days in damp conditions.

If you fish or cannoe in Scandinavia clean all your kit (especially nets and waders) and then treat it by either drying it at a minimum temperature of 20 degrees C for at least 2 days, or better still by using chemicals such as Virkon or Wescodyne.The Tay District Salmon Fisheries Board has supplies of Virkon. Any angler/cannoeist returning from Scandinavia to enter the Tay may obtain the chemical free of charge from our office.

The gill maggot (Salmonicola salmonea) is a parasite which can be found attached to the gill filaments of adult salmon and is frequently of interest to anglers who normally associate it with kelts. It is in fact not a maggot at all but is a copepod crustacean which lacks a shell. Larval gill maggots attach themselves to the gills of adult salmon during the period when adults are in freshwater and then grow by sucking blood. The gill maggot then remains on the adult fish and requires the fish to return to the sea and successfully return to freshwater in order to complete it's life cycle.

Thus, gill maggots are usually seen on salmon which have been in freshwater for a considerable time, like kelts, although they can sometimes be found on fish which have been in freshwater for only a few months. The larger adult gill maggots are found on salmon which are returning to spawn a second time. Gill maggots on a fresh run fish are therefore a good indicator that the fish might be a previous spawner.

This is a very nasty virus. To date it has been shown to have had a serious impact on the salmonid aquacultural industry..

The annual cost of infectious salmon anemia outbreaks among farmed fish in 1999 was reported to be $11million (U.S. dollars) in Norway, $14 million in Canada, and the 1998 – 1999 epidemics in Scotland were valued at a cost of $32 million.

There is much debate as to whether this is a naturally occurring disease, which is impacting aquaculture, or whether the high stocking densities and transport of fish by those involved in aquaculture is exacerbating the problem for wild fish.

To date there is little evidence that wild Sccottish stocks have been harmed, but then the disease is hard to recognise without pathology. The fish develop pale gills, and may swim close to the water surface, gulping for air. However, the disease can also develop without the fish showing any external signs of illness, the fish maintain a normal appetite, and then they suddenly die.

Vigilance by all anglers is encouraged. Most salmon after an extended period in fresh water will have pale gills, but if you catch and kill a sea-liced fish with pale gills that shows abnormalities on gutting.. we would like to take samples for analysis.

Saprolegina is a fungus which can affect salmon and sea trout in freshwater, including their eggs. At the present time it is perhaps the most serious pathogen of wild adult salmon in the River Tay and its tributaries. It is a major problem when looking after the hatchery, the holding of broodstock and the groundbreaking Atlantic salmon kelt reconditioning project. It is widespead in the natural environment. As a fungus it can attack damaged areas of live adult fish but it also lives on dead fish, dead eggs or dead alevins, fry and juveniles. Adult salmon are particularly susceptible for several reasons. On entry to freshwater their skin is less thick and scales are looser then after they have been in freshwater for some time. Fresh run fish can be very susceptible. Also the fact that adult fish are not feeding and that body reserves are transferred for gonadal development mean their immune systems are weakened compared to say brown trout or salmon parr. Stress exacerbates the disease as does the number of affected fish around influencing the amount of spores available to infect fish.

In the wild saprolegnia is often association with spawning or spent salmon which are in poor condition and may be damaged. A small amount of infection may not prevent such fish from spawning successfully.

However, saprolegnia can sometimes infect adult salmon ealier in their migration. Incidence of the disease tends to be highest when large numbers of salmon are present in a small area, particularly if they are prevented from moving upstream by some barrier and the fish are presumably stressed. Thus, congregations of fish in low water conditions downstream of a waterfall, a weir or even just too low water in the river are very susceptible. Concerns are also sometimes expressed that the way that salmon are handled by anglers when being released may make them more susceptible to saprolegnia. We have seen instances where saprolegnia has taken hold in the tail "wrist" area both after confirmed handling and where handling has been presumed. Of course this is not to say that all handled salmon might develop infections. That will depend on other factors, but as a precaution anglers should not handle live salmon by gripping the wrist of the tail. 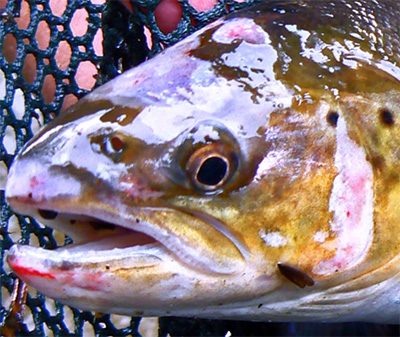 Saprolegnia is often popularly confused with a condition known as Ulcerative Dermal Necrosis (UDN). UDN was a major issue in the late 1960s particularly and is considered responsible for the deaths of at least hundreds of thouands of salmon in the British Isles at that time. The condition appears to be rarely reported now. The symptoms of UDN are damage to / ulcers on the skin on the head of adult salmon and sea trout. The exact cause of this condition has never been fully established. No viral or bacterial infection has ever been proven. Some have even speculated that it might have resulted from damage caused by sea lice.