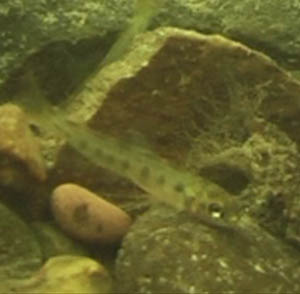 In late spring, once the yolk sac is absorbed, the little salmon, now known as fry, wriggle upwards out of the gravel and commence feeding for themselves. They instinctively face into the current, using the stones as shelter, and intercept items drifting past in the flow. The fry principally live on the larval stages of many species of fly which live in water.

From the start the fry are territorial and compete with each other, and their older brethren, for a good feeding spot. Bigger fish, known as parr, force the fry to remain in the shallowest water, often only an inch or two deep, where the bigger fish cannot go. The sites where most fry are found tend to be shallow, stony but with a good current. Slack areas and back eddies are avoided. The bigger the stones the stronger the current which can be resisted.

Competition forces some dispersal of the fry away from the redd and those which do not find a suitable territory die. The most successful get the best feeding spots, grow fastest and gain even more advantage. It is a cruel world they inhabit!

As they grow the fry utilise ever deeper water and become known as parr. The typical habitat favoured by parr again tends to be shallow stony or even bouldery rivers with a strong current. From about 3 inches to about 12 inches seems to be a pretty ideal depth. Over time the parr might move significant distances moving between habitats as they grow. Some move upstream as well as downstream.

The speed at which the parr grow depends on the amount of food in the river, the temperature of the water, the amount of competition etc. After they have reached a sufficient size, in the spring time the parr undergo a physiological transformation and become known as smolts and head towards the sea.