Numbers of salmon entering the Tay in most months of the year have fallen in recent decades. The decline was most marked among the really early fish, the “springers” which come in during the winter and early spring, but since 2016 summer and autumn grilse have shown a sudden fall too. In 2018, spring salmon catches also fell further and this was repeated again in spring 2019. In view of the spring catches and as a precaution that summer runs follow the recent pattern, the Board is now recommending that all salmon and grilse should be released throughout the season. The Board is particularly concerned that spring salmon should be protected during their long migration through the main river and into tributaries in the summer and autumn before the eventually spawn. These fish are the most vulnerable to angling exploitation as they are exposed to angling over many months. Exploitation rates of up to 40% can occur in some rivers, studies have shown. It is essential that exploitation of these, and all our salmon and grilse, must be reduced as far as possible. The Board’s Conservation Code has been updated to reflect this.

STATUTORY CONSERVATION REGULATIONS WHICH CAME INTO FORCE IN 2015

The Scottish Government introduced regulations in January 2015, which require the mandatory release of all salmon caught in the Tay district from 15 January to 31 March. All salmon must, by law, be returned to the water, even if a fish has died. The Board's bailiff team will be enforcing this new legislation. Thereafter the Board's recommendations continue to have effect.

From 15 January to end of Season:

All salmon and grilse should be released.

To download a pdf of the 2020version of the Board's Code, please click here. This download is laid out to be printed on both sides of a single sheet of A4 and makes a handy leaflet. If you are not sure how to identify a hen salmon please download the following salmon identification poster

Anglers are requested not to fish with worms up to 31 May nor after 31 August anywhere in the district. As many fish are deeply hooked, the Board considers this method of fishing incompatible with the need for conservation.

However the Board recommends that between 1 June and 31 August any worming which is done should only be with with Circle hooks or Shelton release hooks which are designed to help prevent deep hooking. Contact the Board for details of suppliers.

The purpose of releasing salmon is to ensure that they survive to spawn. They will not do this if they sustain injury or damage which allows fungus to attack. The fungus Saprolegnia, is an ever present menance and can quickly overcome fish which are stressed or damaged. The mucus is the first line of defence and should not be damaged. The following simple steps must be followed:

Use a fine, knotless meshed landing net and ensure the fish remains in the water.
Do not beach the fish, as abrasion can lead to infection. Knotted nets, gaffs and tailers are now illegal in Scotland anyway.
Minimise handling the fish. Fish should never be "tailed".

Wet your hands. A dry, bare, warm hand can cause abrasion which later may lead to infection.
Remove the hook gently. If possible remove the hook using forceps or a hook disgorger, taking care not to squeeze the fish.
The use of barbless or micro barbed single hooks is strongly recommended, as they make removing the hook easier.
Take care with fresh, early fish as they are prone to damage and fungal infection.

If possible, try to slip the fish out of the net without touching it!
If you really must, then support the fish, in a current, facing upstream and allow time for the fish to recover and swim away on its own.
Do not weigh the fish but estimate the weight of the fish from its length. Record all fish caught and released.
Photographs by all means, but do not remove the fish from the net which should remain in the water. However tempting, PLEASE DON'T GRASP A FISH'S TAIL!! This can result in fungal infection. 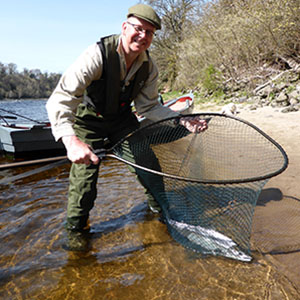 The web is strewn with photos of salmon held like this. If you are to release fish, especially fresh run salmon, this is a recipie for trouble. The abrasion caused by fingers provides an inroad for fungus, especially around the tail. DONT DO IT!

Rapala and other multiple hook lures are popular on some beats on the Tay and in Loch Tay. As the number of treble hooks attached can lead to problems in hook removal it is recommended that such lures should be used with a maximum of one treble hook only.