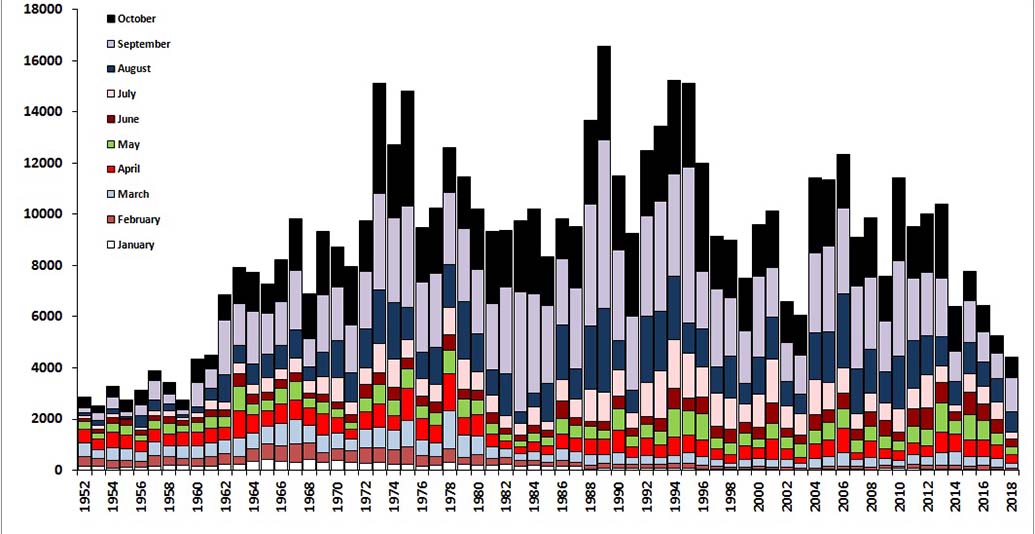 Since 1952, all proprietors have been obliged to provide a return of salmon caught each month if asked for by the Government. Marine Scotland has published these returns as whole district monthly rod and net catches here. For some recent years, the Board has obtained more detailed data from Marine Scotland and has identified some missing data. We have been able to rectify some of the gaps. The graph below is an amalgam of long term data collected by the Government and other data collected by the Board and might not be identical to Marine Scotland figures alone.

As with angling, the Government has collected netting catches since 1952.
At the end of the 1996 the last major net fisheries in the Tay closed down. Since then, only very small numbers of fish have been caught. The graph below shows the monthly catches from 1952 to 1996. The netting season used to finish 20 August. The catch data show a number of trends.
In the 1950s most rod caught fish were taken in the spring. Autumn catches were very low. Following a slight increase in the 1960s, rod catches for the early spring show a downward trend thereafter. In the 1950s the nets caught most of their fish in summer, though in much smaller numbers than in the 1960s and early 70s. In the 1950s, spring catches were a bigger proportion of the net catch than in later years. Early season net catches then also showed a long term decline, but without a temporary increase in the 1960s. Rod catches in June and July have tended to increase over time, declining only recently. July was always the main month for the nets and their decline and closure seemed to coincide with an increase in July rod catches in the 1990s. Autumn rod catches were initially very low, but increased greatly in the 1960s, reaching a peak in the late 80s / early 90s. Autumn catches remained dominant, though a bit lower, until the 2010s. However, there has been a significant decline in autumn catches, and indeed all catches, since 2014.
The 2018 rod catch was the lowest since 1961. Rod catches were consistently lower in the 1950s, but then angling effort was probably lower and the net fisheries were operating in the Firth of Tay and more widely along the Scottish coast. Now there are practically none. 2018 therefore may represent the lowest overall abundance of returning adults.